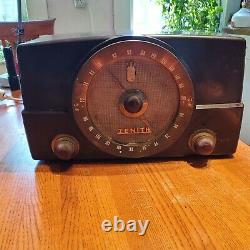 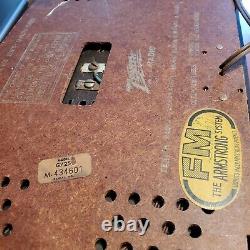 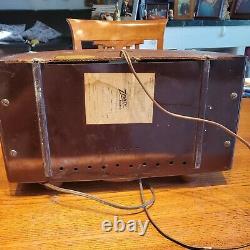 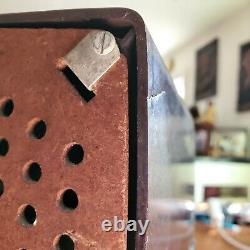 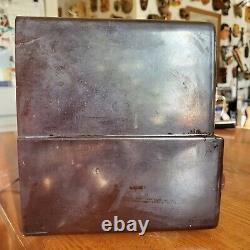 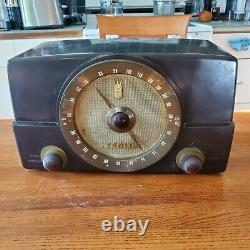 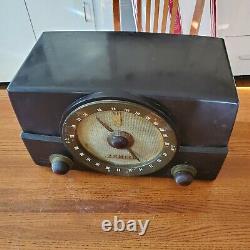 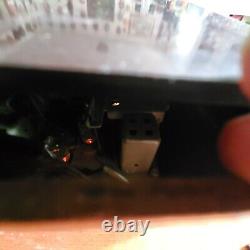 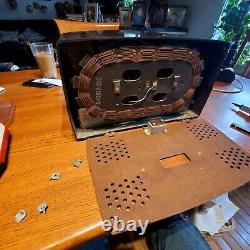 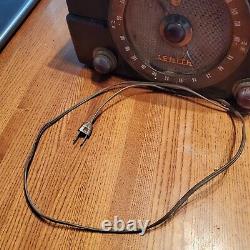 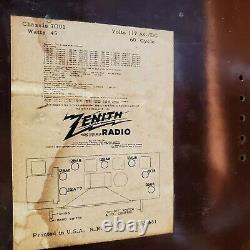 This was in the family since new. Plugged it in and other then 70 years of age it sounds beautiful.

Almost like a new radio. It has been used on an off every few like 4 years so it never just sat in a box. Background in radios from shop classes in HS. Will give a fair assessment.

These old radios often suffer from leaking or bad capacitors- so the sound is affected scratchy.... The sound is nice when you pull in a strong station - several in Boston area and the music and speech are like in the 50's The speaker is fine. Listening to old Christmas pieces now on the radio like Bing Crosby and it sounds very nostalgic.

Actually thought of keeping it have fond memories of Arthur Godfrey show etc. Young Belafonte voice coming through this radio. But have too many things and no real need..

And no space for this. The real problem with these old machines is the variable capacitor used to change channels spin the dial. This dial is turned tightly with no aparent slippage so the string inside that moves the dial is in very good working shspe, and the dial lets you turn until horizontally and then it won't turn. A wire will of course improve reception- the internal antenna is very big. The tone of this radio is excellent to me.

Could keep it but also just not a radio listener any more. While washing the Bakelite case with a sponge &####129533; notice a crack in the case on the side it's in the photos. That's it as regards to issues that can be reported about this radio. Other then the finish which has aged, It's really not beat up worn out or have other major issues. Was going to polish case like is obviously done by many Bakelite radio sellers.

Have polished similar radios so they look new, with a great luster... Have used Personally toothpaste youtube has several instructional videos how to do this.

Using things like Brasso even which seems odd but works. What is most important is the tuning dial which is tight and works like it should and the speaker which is very nice judging from the sound. The photos show some corosion to the round metal dial with the numbers. The cloth on the dial can be restored i guess.

Wanted to take photos of the chassis with the lit up tubes and squeezed a photo of some tube light coming out. Don't want to bypass saftey cord plug connector. Also this means a new cord can be made without dealing with chassis and a soldering iron. The cord however is fine. The tiny hole above the volume button may have had a light - but don't know in this model since it is not the model with the handle- that's certainly not a hard fix if you have the bulb.

It is a rare normal looking Table radio without that unattractive (in my opinion) handle on the top. This type of radio was designed as kitchen or living room furniture- the handled version detracts from the classic look and you can't put a lacy cloth on top and your clock or an item like a small statue with the handle as was done back in the day. This radio was designed to be a fairly stationary item and not something to be lugged to beach parties or the hop which hadn't been invented yet. Ralph Cramden in the honeymooners or lucy and Desi would have had this in the livingroom or kitchen. Eisenhower's voice as president probably came through the speaker. So, there you have it! This is a nice working radio and probably nothing needs to be done internally as it functions as described with minimal need to be restored cosmetically unless you like polishing and stuff like that which some folks enjoy doing. One fellow on youtube picked one of these up from a barn and it was pure junk - restored to beautiful condition. This radio was one owner and just aged gracefully in a couple houses, and has been exercised by being used over the years which probably protected the capacitors. 30 day return on this item.

Plus no ugly handle on top! Some of the photos do show there is still a polish on this case but can be made nice and shinny in probably 30 minutes if you desire. The item "1950 Zenith Bakelite Tube Radio AM/FM G725 nice audio & tuner rare no handle" is in sale since Saturday, December 5, 2020. This item is in the category "Collectibles\Radio, Phonograph, TV, Phone\Radios\Tube Radios\1950-59". The seller is "rjkul" and is located in Cambridge, Massachusetts.